Karthik bought this book for me saying that I would definitely like it and yes he was absolutely right. Its a very good read. It talks about a new breed of people called Economic Hit Man’s (referred to as EHM’s from now) who can go to any extent in exploiting the poorer oil rich countries for the benefit of United States. Their strategy is fairly simple – convince the poorer countries to accept development loans and then to make sure the development projects were given to U.S. companies so that the money would be back to U.S. And then when the countries are neck deep in debts, they start exploiting them by taking favours like military cooperation, political support, access to natural resources like oil supply or control over water bodies/canals, etc.

The author John Perkins himself was an EHM and throughout the book he talks about all the dirty deeds done by him as an EHM. Another interesting aspect mentioned in the book is when the EHM way does not work out in any country, the next level is to use the CIA (termed as jackals in the book) to carry out any assasinations and the final approach would be U.S. military intervention when everthing else fails. Was it not for this book, I guess we would have never known that such kind of events actually took place. It shows how deceptive the news we get through newspapers, raidos & televisions can be. The underlying facts are not always evident directly.

The book starts with how the author’s childhood, education, etc., has contributed to his becoming an EHM. Then he starts describing his assignments, success stories and the way the poorer countries were forced into debts and ultimately driven into extreme poverty. The book gave me a clear picture of many of the events that occurred in the last few decades. Though nothing can be done about them now, knowing the inner details has given me a new perspective of looking at things, to actually look at the hidden side of the events. This reminds me of the book Freakonomics: A Rogue Economist Explores the Hidden Side of Everything. The EHM’s in the disguise of Economists are set out to exploit the weaker nations.

Out of all the events described by the author, what I liked the most are – Panama Canal & Saudi Arabian issues and the two Presidential deaths (Ecuador & Panama) which were the best examples of CIA assasinations. War on Iraq was the best example where in both the EHMs and the jackals failed and ultimately U.S. had to resort to military intervention. Another example wherein both the EHMs & jackals failed was in Venezuela. But there was no military intervention due to the war on Iraq and Afghanistan issues. On the whole the book covers some of the major events from the 1960s to 9/11 attacks on WTC.

One more interesting aspect that I found in the book was the reasons why the author had actually chosen the EHM way. It was basically because of his childhood experiences, his brought up and his inner frustrations. As the author grew up he always wanted to try out what all he had dreamed of as a child but could not do because of restrictions at home. It was his vindictive nature that actually led him to accept the role of EHM. The benefits of being an EHM lured him to accept it and in a way he was actually trying to overcome all the frustrations that he had since childhood. I have seen this kind of a behaviour in real life as well wherein people just do something to actually take revenge against what they could not do till then. They get into things for the wrong reasons and end up in troubles. What they do not realize is that they are actually doing more harm to themselves than to anyone else.

And to end this long post I would like to mention about the non-profit organization called Dream Change started by John Perkins to transform global consciousness.

Read the book “The Last Lecture” by Randy Pausch today. The book is more or less about his childhood dreams, how he realized them, his family & kids and how they were trying to get things in proper shape before his time would come. But most of the points that he talks about apply to everyone in general. I found quite a few interesting things in it. Though we know most of the stuff that he mentions, its a good read.

For those of you who don’t have any clue about who this Randy Pausch is and what is this last lecture about, here is a brief introduction about him and the background of the book…………..Randy Pausch was a professor in CS department of Carnegie Mellon University. At the age of 47, he was diagnosed with pancreatic cancer and had few months to live. That’s when he had delivered his last lecture in CMU titled “Really Achieving Your Childhood Dreams” and then he came out with this book. He says all this was for his children so that when they grow up and he would not be with them then, the lecture and the book would tell them who his dad was, what he wanted to tell them when they grew up, etc.

Now coming to what I liked in the book, it goes like this – The first point that I liked the most was when he says “When you’re screwing up and nobody says anything to you anymore, that means they’ve given up on you“. The moment I read this it reminded me of my good old friend Jayant 🙂 . The book says – Critics are often the ones telling you they still love you and care about you and want to make you better. I think that’s 100% true and its only your good friends who would take time and the pains to tell you that you are not doing the right thing.

Then I liked his concept of head fake 🙂 . Not the literal meaning of a head fake in football but the one that he defines as – the one that teaches people things they don’t realize they’re learning until well into the process. And the best example of head fake that he mentions of is the Alice software developed in Carnegie Mellon. Another interesting one was when he mentions about the attitude of Shatner a.k.a Captain Kirk of Star Trek. He was a man who knew what he didn’t know, was willing to admit it and would not leave until he understood that. I strongly feel that this is the kind of attitude that everyone should have. Have the courage to admit what you don’t know.

Then I liked the attitude of Disney World workers. Ask them “What time does the park close?” and they would answer: “The park is open until 8 p.m.” And then when he talks about brick walls (hurdles) that come in our life, he mentions that they actually give us a chance to show how badly we want something. And then he says don’t ever obsess over what people think about us. That would save a substantial amount of time in our life. Just carry on with your work not bothering about what others might be thinking about it. That said I don’t mean we need not care about others….it just means that dont worry about what people might be thinking about our capabilities.

Another point that appealed to me the most was – Experience is what you get when you didn’t get what you wanted. At every failure that we might encounter in life, its worth considering the above phrase. I would say, failures are also definitely essential in life. A person who had failed would definitely know how to avoid future failures.

There are many other good points mentioned in the book….but I won’t be writing about all those here now……..just a few other points worth mentioning before I would end this post are – Always be prepared for the worst-case scenario……..have a contingency plan for when everything goes wrong. And lastly he mentions, sometimes all you have to do is ask and it can lead to all your dreams coming true. Just ask and more often than we would suspect, the answer we will get would be positive. Particularly this last point that I mentioned now and the point about brick walls definitely have got relevance to what is currently going on with me 🙂 . I think atleast some of the people who might read this post will definitely agree to it 😀 . Lets see how am I going to tackle the brick wall that’s infront of me right now 🙂 .

Found this book just by chance in a bookstore in garuda mall in bangalore. Its really interesting and for any aircraft enthusiast its a very good read. I am a big fan of Air Crash Investigations in NGC and also any other program related to aircraft manufacturing, etc. Now I even got two small toys….one is a space shuttle and another one is an airplane that I always have in my backpack 🙂 (You can see the pics below). 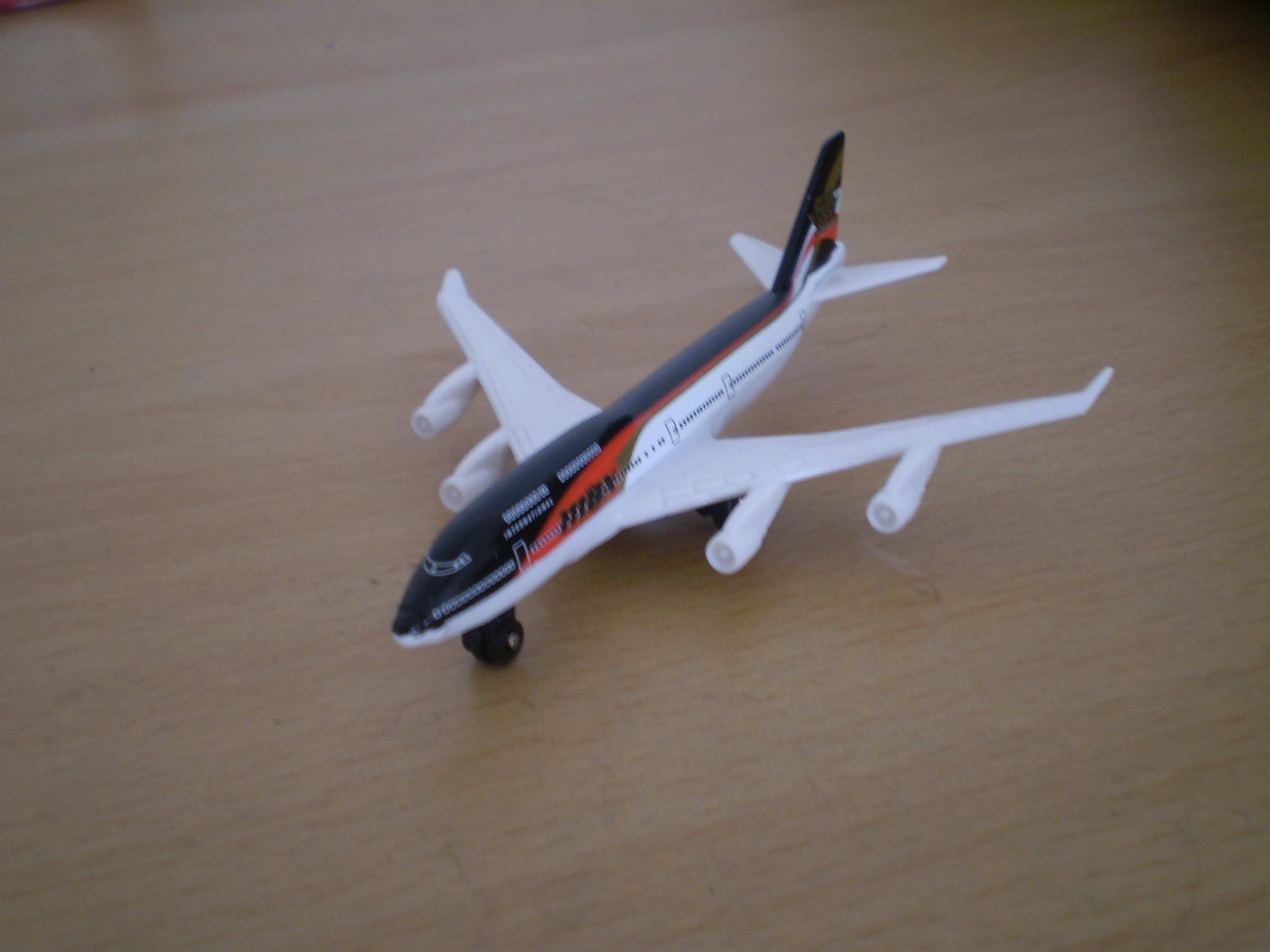 This book has given me a good insight into the aviation business and how the two aircraft manufacturing biggies (Boeing & Airbus) compete in getting the deals. It also talks about the effects of the engine manufacturers, the wing designers, government aid, political influences that go into the making of a single aircraft. I could know about what other players existed before and how only two of the companies ended up being on t

The chapters that interested me the most were the ones with the details of engine makers, toyota manufacturing techniques, how airbus competed boeing with its A320….. the equivalent of Boeing 737, the Airbus A380, etc. One of the most interesting parts in the book was the one about the potential challenge from Asia especially China. I was surprised to know how Chinese government tries to get its political interests in any commercial deal with other countries. Also the japanese market scenario was quite interesting. It also mentions about the Indian market and the huge growth that is expected in the Indian aviation industry. The emirates case was also a good one. Finally, the book ends with the different scandals that Boeing was involved with in the military segment aircrafts. I was really surprised to know about corruption at such a high level even in US defence sector.

One point worth mentioning here is that Boeing definitely has the advantage of US government support in selling its aircrafts. This is definitely evident considering the Japanese market where Airbus has got just about 1% market share. And in the Indian context this is evident from the purchase of 68 Boeing planes (that includes 23 777’s and 27 787’s apart from other smaller aircrafts) in 2006 just after President Bush agreed to sell civil nuclear technology to India in July 2005. Same is the case with Chinese market as well. And just after reading this book my respect for SIA (Singapore Airlines) has further increased 🙂 . I would always personally rank SIA in first position.

The way Boeing has made many mistakes like taking the markets for granted and being stubborn has helped Airbus a lot in grabbing the market share. But ofcourse now its the same scenario in the Airbus stable as well 😀 . Boeing has also the advantage of using the latest technology developed by US military research, thereby reducing its costs in coming out with newer aircrafts. But at the same time even Airbus has got a lot of government aids from the European Union that helps it in getting the launch aid for any new aircrafts that it comes out with.

There are quite a few other interesting points in the book but that would make this post too long 🙂 . I would definitely suggest anyone interested in aircrafts to read this book.